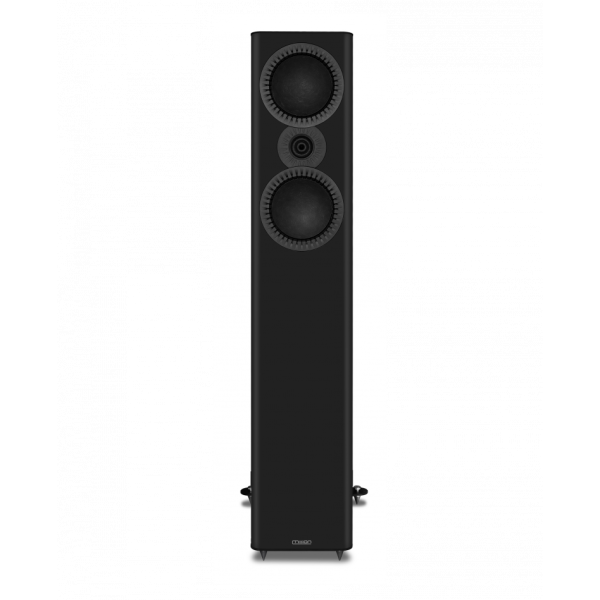 The QX-5 MKII is a 3-way loudspeaker with a 12″ (300mm) bass driver, a 6.5″ (165mm) midrange driver and a ring dome treble unit. Much like the now-established and equally class-leading Mission LX MKII series, the QX MKII series takes an already phenomenal loudspeaker solution but reﬁnes it, optimises it, and brings even more vibrancy, ﬁnesse, and class, through a process of evolution, not revolution.

As per all Mission speaker concepts, the process of listening, listening and more listening is the key to improvement. With the added beneﬁt of modern speaker design tools, such as computer-aided optimisation technology, crossover modeling, and laser interferometry, Mission engineers also spent much time ﬁne tuning the crossovers, components, materials, and construction.

Much like the now-established and equally class-leading Mission LX MKII series, the QX MKII series takes an already phenomenal loudspeaker solution but reﬁnes it, optimises it, and brings even more vibrancy, ﬁnesse, and class, through a process of evolution, not revolution.

An improved acrylic ﬁbre cone material has been chosen for the QX MKII drivers. By it’s very nature, acrylic ﬁbre is hard-wearing but offers a delicate appearance, in contrast of harsh driver materials seen in typical speakers of this price-class. Implemented into the Mission DiaDrive System, the acrylic ﬁbre brings natural mids and exceptional lucidity. The seam-free curvilinear design has a conical support with an increased area of contact with the voice coil. This highly efﬁcient and uncompromising system means the QX MKII series series will excel in terms of timing, with outstanding transient impact.

Aesthetically, the QX MKII series brings new Lux Black and Lux White matte ﬁnishes to the series, with the classic walnut pearl option. The new colour co-ordinated aluminium top-plate is more than just a visual ‘cherry-on-the-cake’; the added rigidity and support offered by this sturdy but stylish addition further enhances the performance of the precision engineered cabinets of this stand-out loudspeaker series.

Overcoming problems inherent in the physics of conventional domes, the ‘ring dome’ centre is ﬁxed with a distinct and visible ‘phase plug’. This design enables extended HF reproduction by preventing cancellation across the centre axis of high frequency waves produced near the centre of the diaphragm. The resonance experienced by traditional domes means that, when they approach high-energy, HF performance inevitably induces distortion. Managing this phenomena inevitably reduces the HF capabilities in traditional domes, whereas the ‘ring dome’ is all but exempt of this complication. The result is a better controlled and much more consistent behaviour from 10kHz to 20kHz, and way, way above! Transient performance is dramatically improved, as is musical detailing, particularly of instrument overtones and harmonics.

Maintaining the basis of QX styling, the QX MKII is conﬁgured in the classic Mission IDG (Inverted Driver Geometry) format. By positioning the treble unit below the bass/midrange driver, the length of path is equalized so the sound waves coincide at the listener’s head height. This principle improves ‘time alignment’.

QX MKII also takes the ground-breaking serrated driver surrounds to a new level. More than just a technical appearance or pretty design touch, the surrounds have been improved by way of detailed air-ﬂow analysis and precise measurement. The new-look QX MKII surrounds help scatter reﬂections and reduce airﬂow interference to improve the silky smooth performance of the drivers and ports.